Next Monday night: Just in Time Films at Divinty Rose's Gypsie Courtyard, Diamond's in St. Matthews (3814 Frankfort Ave). Divinity Rose hosts Louisville's best talent showcase and has already introduced me to great bands, magicians, and... filmmakers I was previously unaware of. If you're not already here, you really should be. Come out and join us! Doors at 8, entertainment at 9, films at 11.

In addition, a handful of copies of the handmade, individually numbered DVDs of The Third Sister: a Universal will be available.
Posted by Chad Thomas at 9:47 AM No comments:

Congratulations to the cast and crew of Pekin Express for winning Best Choreography in the 2009 Paducah 48 Hour Film Project!
Posted by Chad Thomas at 3:28 AM No comments:

The new film will screen September 1st and 2nd at Maiden Alley Cinema. Tickets are $5, General Admission.
Posted by Chad Thomas at 4:02 PM No comments:

The awards ceremony for Louisville's 2009 48 Hour Film Project will be held Thursday, August 13th 2009, at 6:30PM in the Speed Art Museum on UofL's campus. Will animata win an audience award? Will it become the first film in Louisville 48HFP history to win Best Picture without headlining its screening group? What will be the ultimate outcome of our third (and final?) entry in the 48 Hour Film Project? Join us this Thursday and find out!

Dress sharp.
Posted by Chad Thomas at 10:41 PM No comments:

A Brief History of (Just in) Time

Fashionably Dead (July 2007) - Our first entry in the 48 Hour Film Project. Kate Holland says she wishes we had called it "Fashionably Late." We learned the hard way what is and is not okay to attempt in a 48 Hour Film. We pulled "Detective or Cop" as our genre and proceeded to make a black-and-white noir whodunnit, complete with the usual suspects and red herrings. The story was so complex it was undigestable in six minutes. Still, it had a shot I still love (the reveal of the body - across the train tracks and over the railing). Tech specs: 480p, stereo.

Hootenanny (July 2008) - Our second entry in the 48 Hour Film Project went much better and would have gone better still had backstage drama not derailed the thing. Rocko and Ty each gave several hundred percent, but my favorite part remains the poster. WINNER Best Use of Genre, 2009 Louisville 48 Hour Film Project. Tech specs: 480p, stereo.

DARKSIDERS (October 2008) - Hootenanny had nearly 20 people working on it, so I went crazy streamlined with the next project. The entire cast & crew numbered, what, seven? Talakai and I wrote the thing over drinks at Flannigans. We location scouted on Saturday and shot it Sunday afternoon. All the office and break room scenes were shot in the same room. The story is really funny and tight as a drum; I don't think remaking it with better costumes and sets would improve anything. Tech specs: 480p, stereo.

DARKSIDERS episode 2 (November 2008) - A weak attempt to turn DARKSIDERS into a 4-part series. The camera work is crap, the editing not very good, and the story poorly executed. And the cast kept eating all the props. DARKSIDERS is better as a stand-alone; that completed DARKSIDERS episode 3 script will probably go unmade. Tech specs: 480p, stereo.

The Broken Spurs LiVE at Headliners (February 2009) - Dual-XLR soundboard recording. Most of the show tripod-shot and the sound levels weren't great. But by the next to last song, the levels were corrected and I un-mounted the camera and shot handheld. The encore came off great and is worth watching. The rest? Not so much. Tech specs: 1080/24p, stereo.

The Third Sister: A Universal (April 2009) - This was a collaboration with the University of Louisville via Axton fellowship recipient Derek Mong. He held a poetry contest among his students and paired the winners up with local filmmakers to create visual adaptations of their work. This film is an adaptation of John D. Baumgarten's original poem. I spent a couple months on this one, experimenting with mixed-media and trying my hand with visual effects. My fondest memory of it is using an uncoiled stage rope, a vat of Vaseline, and a spray bottle of stage blood to create the umbilical cord that the First and Second Sisters fought over in "The Schism (in a Little More Detail for What You Might Have Missed)." OFFICIAL SELECTION: 2009 Axton Festival of Film and Verse. Tech specs: 1080/24p, stereo.

Spurs on the Water: The Broken Spurs LiVE on the Waterfront (May 2009) - The Broken Spurs opened for The Meat Puppets on an unfortunately overcast day. Adam (the lead singer) wanted me to try shooting this hand-held. I didn't set OIS so its way too shaky. The sound is very nice, though, and this represented my first serious attempt at a 5.1 mix. Tech specs: 1080/24p, 2x stereo.

Sure Thing (June 2009, work in progress) - An adaptation of an old 10-minute play shot entirely green-screen from three angles. I have no idea what, if anything, will eventually come of this. But turning my garage into a green studio was surreal and fun. This was also the first film I worked on that I did not write or direct. I only ran camera. Tech specs: 720/60p, stereo.

animata (July 2009) This was an absolute joy to make. The team clicked perfectly and everything just fired on all cylanders. I wanted to focus on performances, set design, and costumes. All three vastly improved. My goal with each film is to outdo the one that preceeded it. I think this one sets the bar for the next pretty high. Tech specs: 1080/30p, stereo. (The film was screened at Village 8 in 480/30p. I shot 30fps to ensure the framerate was consistent with the lower resolution).

Pekin Express (August 2009) My first collaboration with Mae Waits director Donald Mahoney. The story's a bit slight and the outdoor shot is too bright, but the indoor scene looks fantastic and the actors delivered in spades. Tech specs: 1080/24p, stereo.

Backwards Compatible (August 2009) - Film version of a puppet play, directed by Kathryn Spivey of the Squallis Puppeteers. This one features my most complex audio mix to date, incorporating over 50 seperate tracks. Tech specs: 1080/24p, stereo. 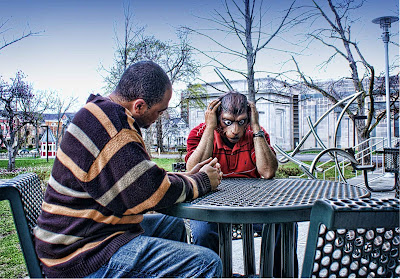 After a slight delay, the numbered limited edition DVD of The Third Sister: A Universal is now available.

Posted by Chad Thomas at 2:42 PM No comments: