Crazy Monkey was incorporated in Louisville, KY as a Limited Liability Corporation on 8/2/2000 by myself and Douglas Clark. After an extended period of intense preparation, Crazy Monkey made its debut at the 2007 Louisville 48 Hour Film Festival.

Crazy Monkey presents: Fasionably Dead made its debut on 7/26/2007 at the Village 8 Theatres. It was kinda cool; the promise of Crazy Monkey, fulfilled after so many years. The film itself was too ambitious and completely misunderstood its audience. Instead of the normal, weird-o fest film, Fashionably Dead aspired to be a film noir murder mystery, complete with All the Usual Suspects.

Problem was, ask someone who had just seen it what happened in it? Chances are they couldn't tell you. I needed something simpler, more immediate. Something that grabbed the attention quick and held it, something that would be respected by the fest crowd because it had a sense of humor and a DIY mentality.

Hootenanny debuted on 7/23/2008. It was good despite not being finished at the time of submission. We spent the next two weeks recutting it until we had what, on 8/4/2008, I was willing to call The Final Cut.

Hootenanny went on to win Best Use of Genre at the 48 Hour Film Project's Louisville awards ceremony at Volksfest 2008.

Problem is, I discovered another film company operates using the name Crazy Monkey. I fully believe I was first and could force them to change their name, but they already have a feature film available on double DVD and are in the process of completing their second. I have no desire to enter into a protracted legal battle and, since I could never find a decent mascot anyway, have decided to ditch the name and take up the mantle Just in Time Films.

Our third film will go into production 10/16 as part of the revitalized Kino Louisville project. More info forthcoming.
Posted by Chad Thomas at 1:52 PM No comments: 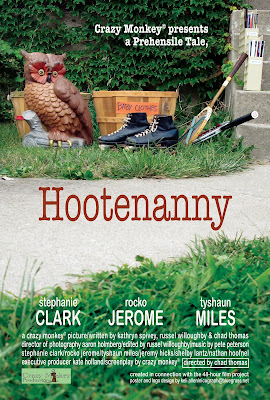 This beautiful poster was created by Keli Allen. It is a full-size one sheet, printed at 14500x22000 pixels. You can reach her at nicograph@bluegrass.net for all your graphic design needs.
Posted by Chad Thomas at 1:48 PM No comments:

Hootenanny: Best Use of Genre 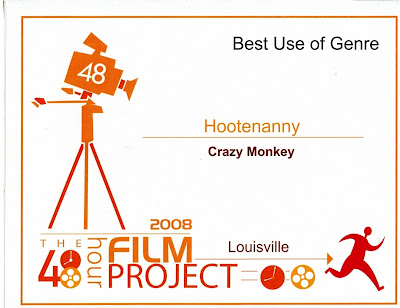 Posted by Chad Thomas at 1:47 PM No comments: